Rectangle 8 was laid out as a trench. A one-meter shipo was allowed for the crosswall between R7 and R8. this wall is now poorly preserved on teh surface but can be traced on the architect's plan and ojn the trench photographs taken when this section was excavated as Agger (see PS book   , p. )

The trench measures 5 x 6 m. and is defined by the surrounding walls. A grid system was set up, and work start3ed in A 1-4. The first layer was

lifted. Str. A, the pavement, is thin, but clearly noticeable. In the second later str. D appeared heavy reddish-brown burnt soil, with specks of carbon. The purpose of this strip is define the edge and the foundations of the cross wall between R7 and R8 and also to pick up the lower foundation wall which runs from R6 from N to S through R7. At some point in R8 we also expect this wall to turn east.

Grid C-D1 was finished in R7. A heavy bronze handle (?) was found on the tufa str. in grid C1. Work was started in A1

giving south to F1 in order to clear the foundations of the eastern wall and sdefine the doorway which borders onto grid C and D.

The only find from this cut was a potnia theron handle which was fround immediately below str. A in grid A3 (19710562).

Right from the beginning of str. D bronze was found in a surprising quantity. A small bag of small slivers of non-descript shape was collected. 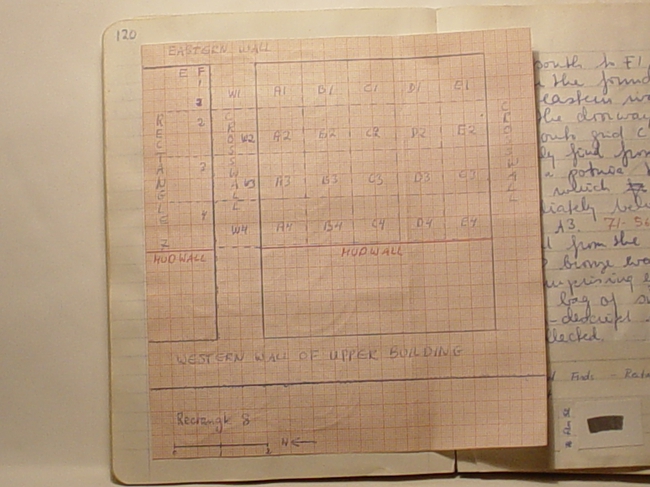