In the second season of excavation in Tesoro 1 the original section of wall was found to be part of a large rectangular structure measuring at least 54.5x12.5 meters. The enclosure thus formed is divided by two crosswalls and well-preserved everywhere except for the southeastern quarter where only bedrock and the very bottom of the foundations remain. Postholes continue up the entire length of the wall, though their pattern is not now clear. Tiles and frieze fragments were found in about the same quantity and proportion as the previous year and again in much greater numbers outside the wall than inside. However, the discovery that pieces of seated statue from widely separated trenches fit together ( see diagram pp. 160-1 ) demonstrated to what extent material was shifted around afgter the collapse of the building. The extension of 1H ( SC, book 1, p. 89 ) as a test cut through the agger also proved that the agger was built up from ground level over a continuation of the tile layer around the outside of the building. But cleaning up in 1G failed to produce

a definite stop for the northwestern return and a similar unended return or projection appeared at the southwest corner as well as an extension south into the adjoining complex 5. The possibility thus emerged that small rooms might lie along the western wall under the agger, only doorway found so far, borders a courtyard which would lie along the southern wall. In any case, the large size, unusual plan, and lack of votive material make the structures future as a temple seem dubious.

Excavation at a lower level outside the western wall and at the northeastern corner also produced the remains of structures built before the main building. At the western end were found substantial remnants of 4 or 5 large pithoi. The northeast corners contained pavement, a curving wall, large amounts of pottery, pithoi, and several almost complete roof tiles of a smaller model than previously found. Buvvhero and a bronze handle from the western end brought it fairly close in date to the main building but no such evidence appeared for the northeast corner and nothing to link the two areas.

Map of trenches excavated this summer

Sketches of trenches 1H, 1S, and 1U profiles 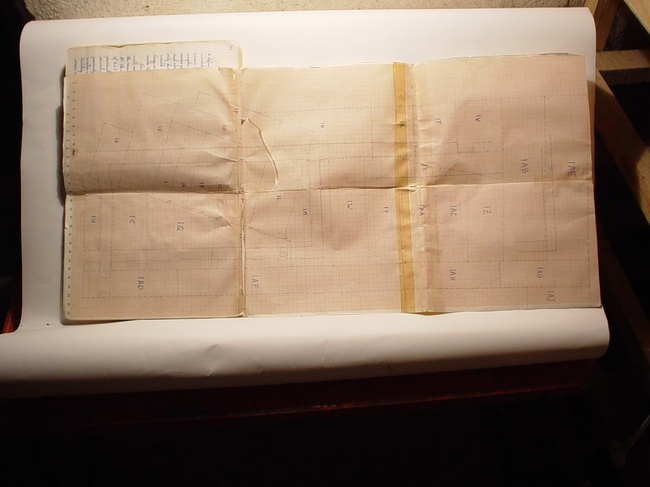 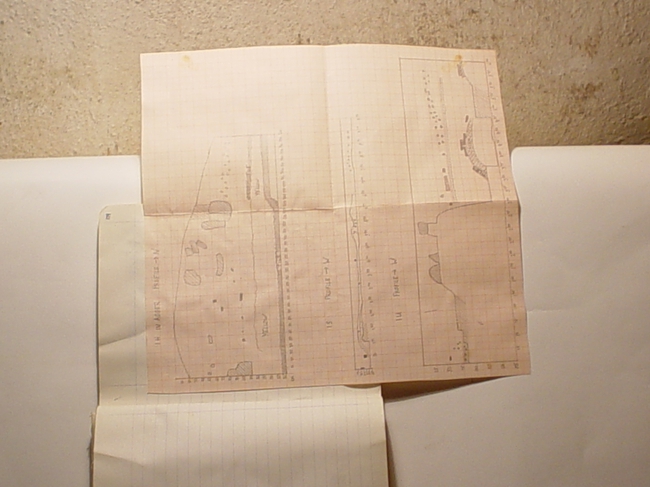