Work was continued in the center of the trench (roughly grid C-E 2-4 in order to define the end of stratum D. As was first noticed in grid E-F 4 the burnt layer (str. D) is superseded by a sterile dustlike (clay-like, if wet) light grey soil. Some of the fixed pieces have been found at the very bottom of the burnt layer, facing the sterile layer (str. E). Work progressed slowly. Pottery, mostly bucchero, appeared in quantity rather than quality - small worn sherds with little or no decoration.

The most exciting find of the day consisted of two bronze statuettes which appeared in the burnt layer, at its very lowest part. The figureines lack legs but are otherwise well preserved. 4 heavy bronze nails and a needle were found only ca 10 cm. from the figurines.

A bone button and a bronze nail appeared right next to the side of a pithos. It should also be noted that the bronze statuettes were found- face up- under a pithos fragment which was lying flat on the ground. 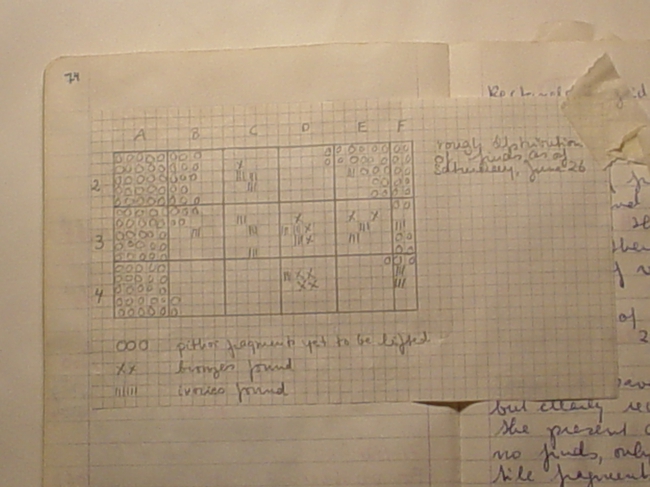